This is a post I originally made for Retro Pinup Norway, if you want the Norwegian version click here

The pinup culture has its origin in the USA and is without a doubt biggest over there, too. In Norway we don’t have any who is known as a pure pinup only, but since the definition of a pinup can be something like «a model who is called a pinup, pinup girl or pinup model and can be a photo model, actress or sexsymbol», we do have some celebereties who we can loosely define as Norwegian pinups.

I’ve gathered some (and I’m sure there’s even more I’ll add in time) that I want to present to you.

Figure skater, Olympic winner and movie actress. She won gold in 3 Olympics, 10 World championships and 6 Europe championships in a row.

Sonja Henie is the most internationally known woman in Norwegian history. She was one of Hollywoods most famous movie stars in the 1930s and 1940s and she had her own ice shows until the mid ’50s.

Her big brother Leif was the one who introduced her to the figure skating in her early years. At the age of 6 she already was a great talent and in the 4th grade her dad took her out of school to skate full-time. Sonja Henie alone made figure skating a world sport.

Sonja Henie died from leukemia on board a plane from Paris to Oslo fall of 1969.

No Norwegian woman har reached a so extensive fame as Sonja Henie. The story of Sonja Henie in Norwegian context is a fairy tale of a girl who won the whole world, but also the tragedy of a famous human who lived in a lonely vacuum where the axis of the world spun around herself.

The one and only diva of Norway! Known actress and singer. She studied the art of song and had great successes with different acts and performances. Her acting was very versatile. She has played parts from the scenic repertoire to comedies to modern drama.

Wenche Foss was a very social involved person who fought for all injustice. In 1953, when she was 36 years old, she had her first child, Tommeliten, who was born with Downs syndrome. No other person has done so much to raise awareness for the mentally deficients conditions in Norway as Wenche Foss has done. In her openhearted book «Etterpå» (Afterwards) she writes of her involvement for children with Downs syndrome and her own battle against cancer.

Singer and actress. As a teenager she dominated Norwegian ’60s pop and she had an extensive international career. Her breakthrough was in 1962-63. Her 3rd place in the Norwegian Melodi Grand Prix in 1964 with «La meg være ung» made a clear watershed in Norwegian pop history with its international sound. Also, something as un-Norwegian as a fan club was started that raised money to a child hospital in Gaza.

As a 20-year old she turned down offers from USA to be a part of Povel Ramel in Sweden. The revue «De sista entusiasterna» (The las enthusiasts) 1968 was her breakthrough in the at the time important Swedish music show «Svensktoppen» where she soon got several hits. Since that time Wenche Myhre has been three different artists with three different careers all in one. Back home in Norway she is the pleasant Wenche we all know but she is also a central-european hit machine and television queen and is known in Sweden as a hailed cabaret artist.

The Norwegian press often reported of her European career in the ’70s but her shows and records was only exceptionally imported back home.

Wenche Myhre got a Spellemannsprisens (Spelleman award) honorary award in 2004 and same year she was appointed knight of 1. Order of St. Olavs Order. 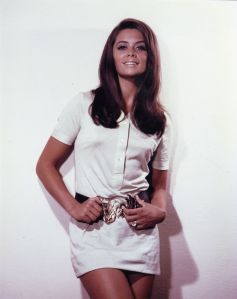 Model and actress. She was a finalist in Miss Norway as a 18-year old and got a 2nd place. She also got 2nd place in Miss International. She moved to London to study at the London Academy of Modeling and was published as a pin-up in several British news papers. Her big breakthrough was when she was photographed for Playboy. The result was Playmate of the Month August 1975, Playmate of the Year 1976 and she being the most photographed Playboy-model ever, and 9 times of the cover of Playboy.

Later she has entered the health industry and published a health related book.